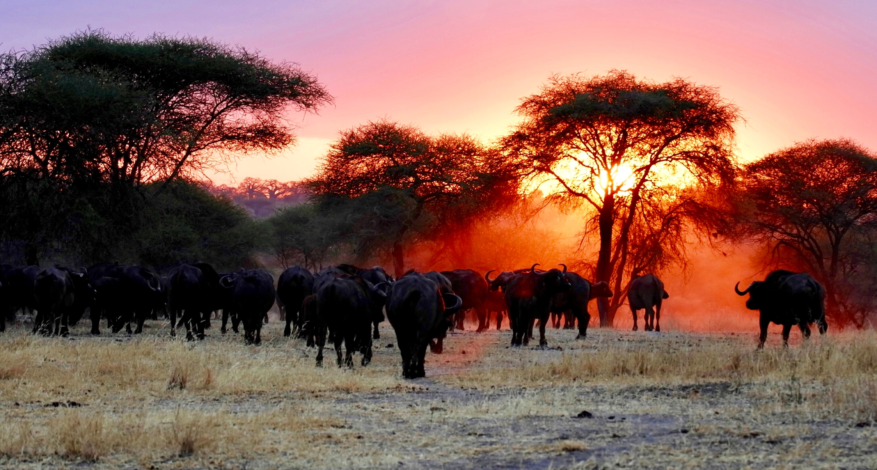 Serengeti national park offers the greatest wildlife spectacle on earth, which is the wildebeest migration. Statistics of wildlife population indicate how immense the Serengeti is: 1,500,000 wildebeest, 700,000 Thompson gazelles 200,000 zebras, 65,000 Topi, 2,000 lions, 800 leopards, 4,000 hyenas, 200 wild dogs, 500 cheetahs, 50,000 Grant gazelles, 500 species of birds, more than 30 species of large herbivores…among others. Dry seasons in Serengeti push over 1.5 million wildebeest moving in circles in remarkable huge herds along with zebras, elands, and gazelles looking for greener pastures. A variety of wildlife also found in Serengeti includes; bat eared fox, rock hyrax, zebras among others and over 500 bird species. Large predators such as lion, leopard, cheetah, hyena take advantage to hunt and can be seen in action. Although this is a wildlife focused trip, it can also include cultural visits to Hadzabe tribe in Lake Eyasi or Maasai village which will give you a memorable experience while benefiting the local communities you visit.

Before the tour starts our team will pick you from Kilimanjaro International Airport and take you to your hotel of residence in Arusha town or close to Lake Manyara national park.

You will be met by our Oree Safaris’ driver guide and after briefing start your journey from Arusha at 08am via rift valley landscape to Lake Manyara national park. Arrive at your overnight lodge in mid-morning and spend the rest of the day out in the African bush for game drive.

Lake Manyara national park contains a variety of habitats such as lush acacia, fig trees, ground water forests, hot springs and the alkaline lake. As a result, there is abundant wildlife in this park including tree-climbing lions, giraffes, elephants, hippos, buffaloes, impalas and over 400 birds including pink flamingos. Be sure to Witness the large flock of flamingoes descend on Lake Manyara very stunning views.

You can take advantage of the optional boat ride excursion on Lake Manyara to view hippos and birds. You may have dinner and overnight stay at Manyara Tree Lodge/ Manyara Serena camp or Manyara wilderness camp.

Day 2: Manyara to Ngorongoro Crater (8thWonder of the World)

After an early morning game drive and breakfast in Manyara, transfer to Ngorongoro Conservation arriving at your overnight lodge on time for lunch. Later in the afternoon descend into the crater which covers an area of 256 sq km and contains different habitats such as grassland plains, rivers, salt lakes and swamps. Ngorongoro crater is a natural 8th world wonder home to about 30,000 animals the highest density of wildlife in the world including big five notably the black rhinos. It is located west of the Great Rift Valley, which runs from the Red Sea to Lake Nyasa in southern Tanzania. It was an active volcano some eight million years ago, its cone collapsed, leaving a crater. It is the largest unbroken caldera in the world, the second largest extinct crater in the world, and today it shelters the most beautiful untouched wildlife concentration of wildlife and stunning views of over 500 birds including ostrich.

You will spend an evening in the crater, return to your lodge for dinner and overnight

After breakfast, transfer approximately to the land of endless plains approximately 3-hour drive. You will pass through the highlands where a clear view of Ngorongoro crater to to Seronera valley in the central Serengeti. The word Serengeti means “land of endless plains” in local Masai language. The park covers 5,700 sq miles of rolling savannah plains that merge with Masai Mara wildlife reserve. The highlight in this ecosystem is the wildebeest migration featuring over 1.5 million wildebeest which move to central Serengeti between April to May. A variety of wildlife found in Serengeti include big five mammals over 500 bird species.

The best lodges are booked for you to guarantee a nice stay and viewing of wildebeest migration. Lodge: Ndutu lodge/ Kilima valley lodge/ four seasons lodge.

Day 4: Full day game drive central Serengeti national park Game drive starts early morning after breakfast, while following the trail of the wildebeest movements. Return back to the lodge for lunch or have an option of packing lunch and spend more time in the wild. At the end of the day, return to your lodge for dinner and relaxation.

You have the time and freedom to spend 2 nights in one of the areas following the migration wherever it will be.

You have the time and freedom to spend 2 nights in one of the areas following the migration wherever it will be.

Day 7: Back to Arusha Have breakfast, check out and transfer to Arusha town for a city tour and Lunch before departure at Kilimanjaro international airport for your international flight back home.

You may add another day or 3 dedicated for relaxation in Zanzibar islands at an extra cost. This itinerary can be tailored to your interests.